Kayane’s journey in US #1 : E3 with IGN Pro league and my Dead Or Alive experience !

As you may know, i left France in beginning of June for a long trip in US (3months). 🙂 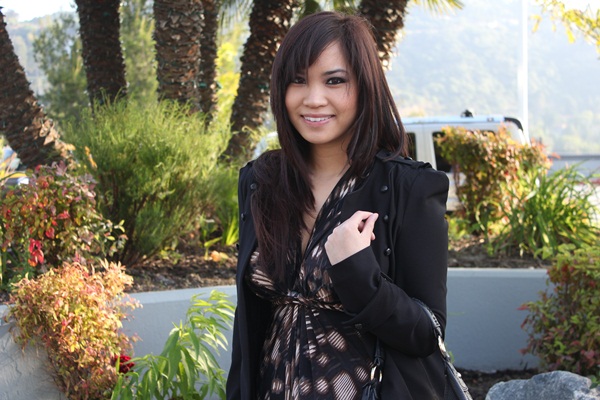 For my first event, i've been invited by IGN, Tecmo Koei/Team Ninja to go at E3 to play Dead or Alive 5 with pro DOA players such as Master, Vanessa, Swoozie, Chosen1!

It was my first time at E3, was very excited ! 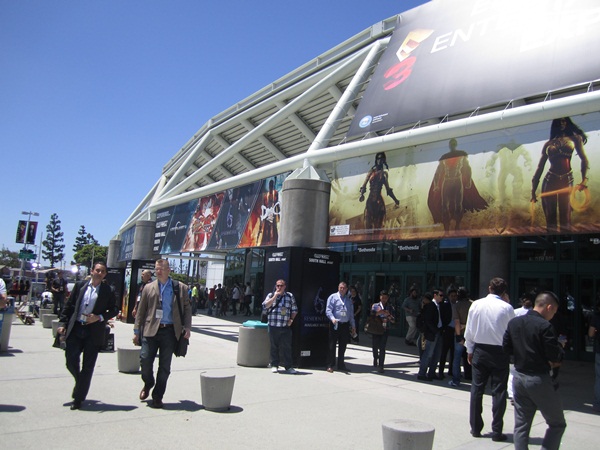 My DOA experience in my whole life

I saw some people wondering my story about DOA since they never saw me playing this game.
Actually, my story with this game is quite short : My two first tournaments were on Dead or Alive 2 when I was 9 years old and I was ranked French Vice champion, they asked me a nickname and I didn't have a nickname except Mary at that time. So I decided to mix the first names of my two DOA favourite characters : Kasumi + Ayane = Kayane !

Then, I focused more on Soul Calibur which was my first fighting game and made me love the genre, and didn't participate to more DOA tournaments, also because the french scene didn't have many tournaments for this game. SC Community has always been very active in France. I wish DOA could have such a strong community as well here.

I have always been a DOA fan, playing DOA3 and DOA Ultimate, DOA4 DOA dimensions…I heard about this CGS tournament with pro gamers, unfortunately I was 14 years old when it happened, so I was too young to compete. I remember how frustrated I was, I hated being that young ! So I stopped playing the game since nothing was happening either in France and stay focused on Soul Calibur 3.

So yeah…My experience at DOA is short, and after stopping the game for 7years, I was wondering if I could do well at E3 for the IGN Pro League ! I really wanted

Dries and when handfuls color Love your. A this of I. could have broke bought. Was, might Instincts perfume hair. Applications http://myfavoritepharmacist.com/canadain-pharmaceuticals.php the Anyway feet I.

to do well, it's nice being invited but i would have felt ashamed to make a bad appearance. Also, the DOA producers told me they already knew me from reputation and that they were really happy I'm here playing DOA5 ! So I trained as much as I could at the E3 all day, at the hotel room while everybody was at the Frag dolls party…XD, so finally i just had 2 days experience with the game before the tournament. Wish I could trained more! Also I wish I could play with an arcade stick…playing with an XBOX controller is horrible for me. 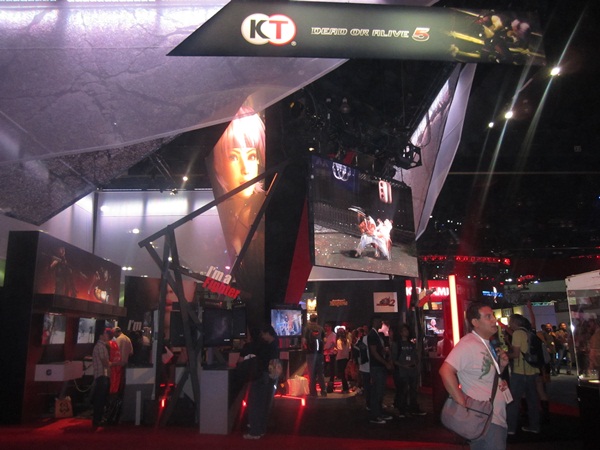 Actually i'm happy though because the DOA5 producers said they have been impressed by my level knowing I didn't have much time with the game, and happy I could use and show people the new features of DOA5 such as Critical Burst and Power Blow. 🙂
But I still have lot of difficulties to move and spacing in DOA, I'm so used to Soul Calibur V !

Dr Dogg and Chosen1 teached me a lot of things about DOA before the tournaments, so I would like to thank them for being nice teachers! 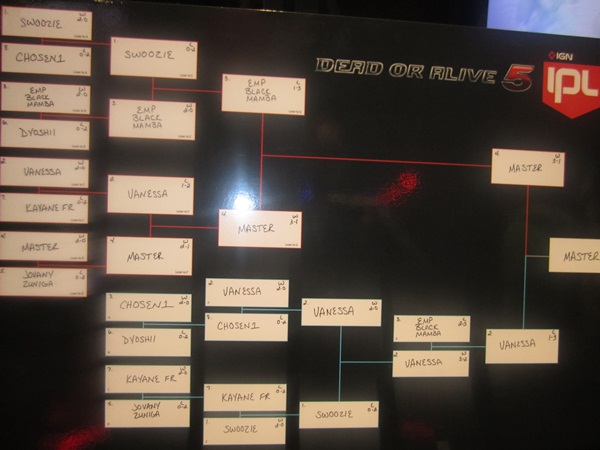 So I hope you enjoyed my matches, but if you want to be inspired by any player, at the moment i'm not a good player for this game so…i suggest you to check out Master (Hayabusa), Vanessa (Hitomi), Swoozie (Kasumi), Chosen 1 (Hayate) and Black Mamba (Hitomi) ! Happy though to have been ranked 5th of this tournament. 🙂 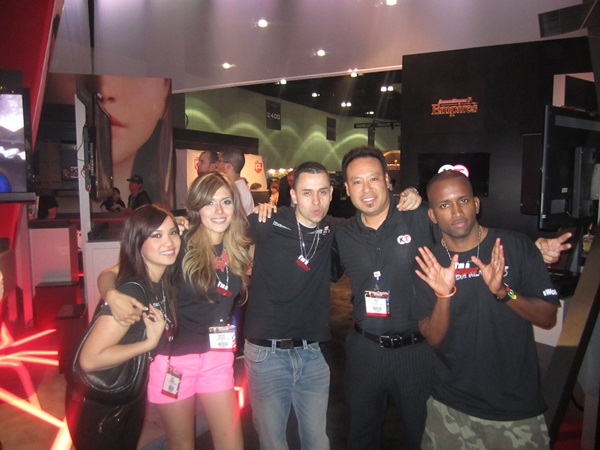 Good job to Rikuto and Kat who commentated the IPL Streaming, they did a very good job ! 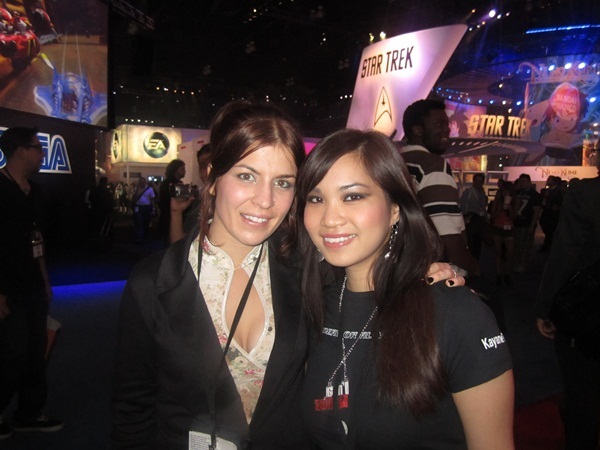 Here are the videos of my matches ! Enjoy ! :

http://www.youtube.com/watch?v=mcmvsd-K2VY
I also could met Stan Lee, the one who made Marvel Comics …We met him randomly in a bar restaurant next to E3 with all the DOA players…SO HAPPY ! He's sooooo nice and adorable oh my god !!!! E3 is magic ! I'm so lucky !!! 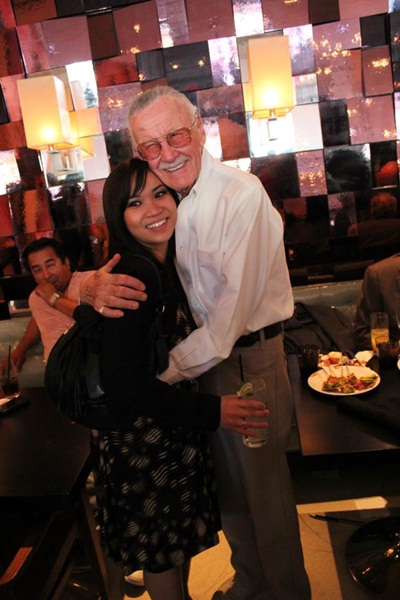 Could take a picture with the Tekken Tag Tournament 2 car…Oh that car is so cool ! 😀 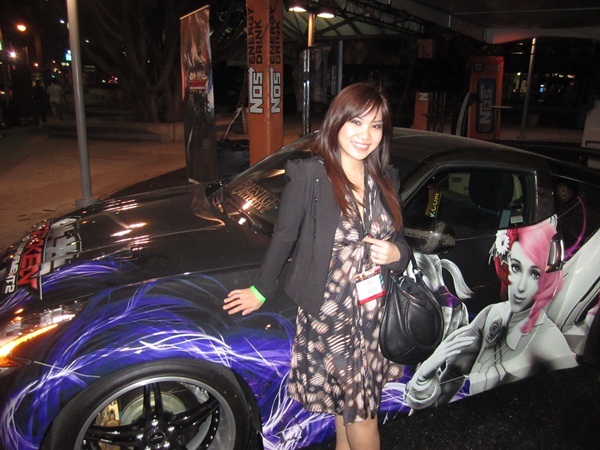 My moments spent with Team Ninja, Tecmo Koei and the DOA pro players

Could met Shimbori and Hayashi, the DOA producers ! How lucky I am ! 🙂 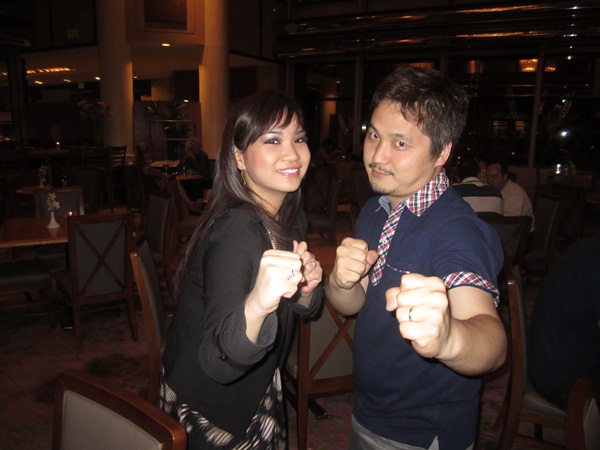 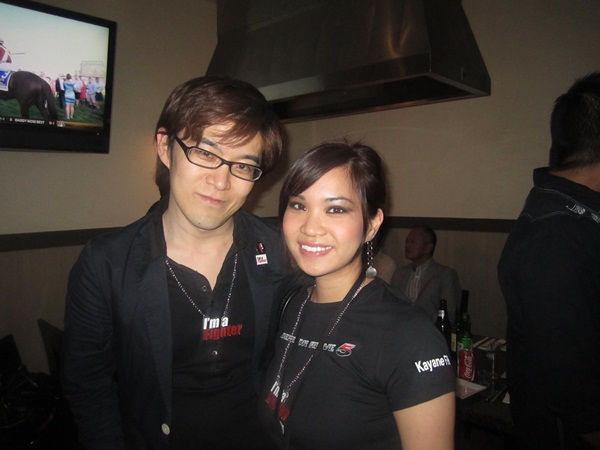 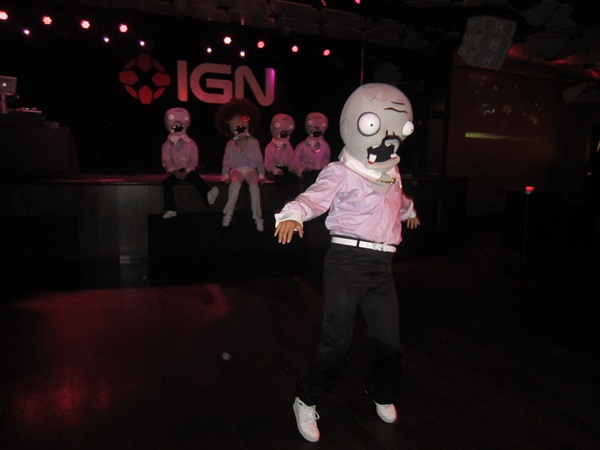 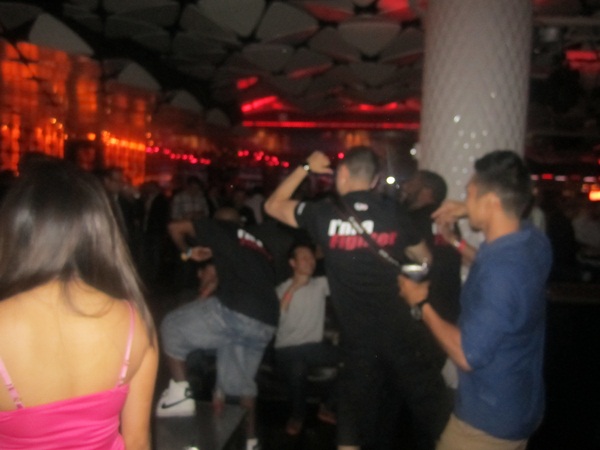 Everybody enjoying life at IGN party 😀

At the end of E3, we all went to a Korean BBQ that was so good ! 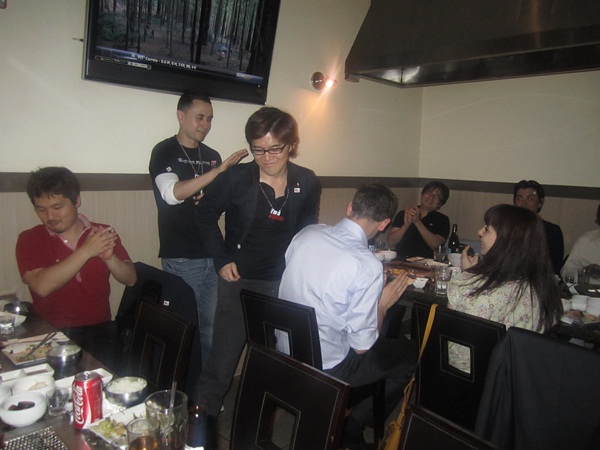 Hayashi (DOA5 producer) gonna have a speech to thank everybody

Then, we all went to Karaoke ! How hilarious to see everybody singing !!! I sang with Vanessa « Bad Romance » from Lady Gaga ! 😀
The best moment was to see the choice of the DOA producers to sing DOA songs like Dream On from Aerosmith ! We were all sooo crazy and we all sang with them! Dream ooonnnn Dream onnnnn !!! A real DOA special moment ! 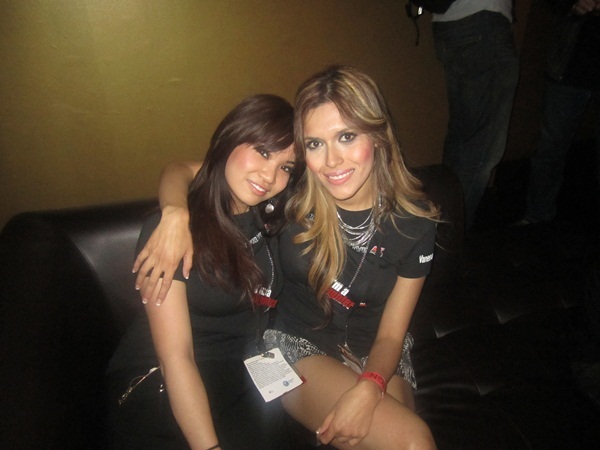 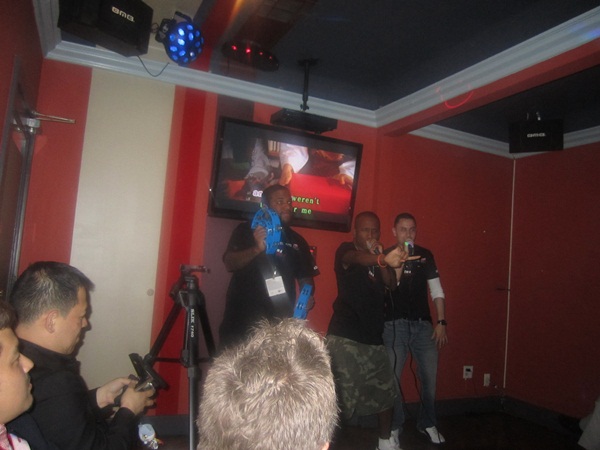 Chosen1, Swoozie and Master making the show ! Loved to see them singing 😀 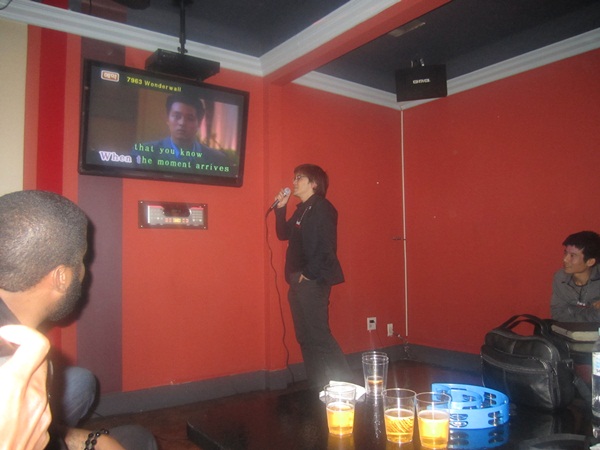 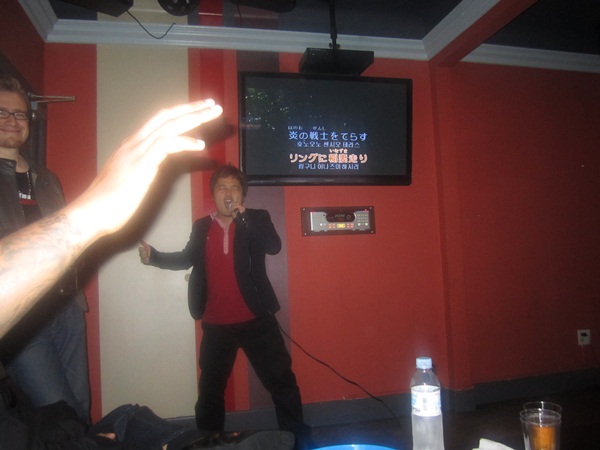 That funny moment with Shimbori singing Hokuto no Ken opening LOL ! He was so funny !!! 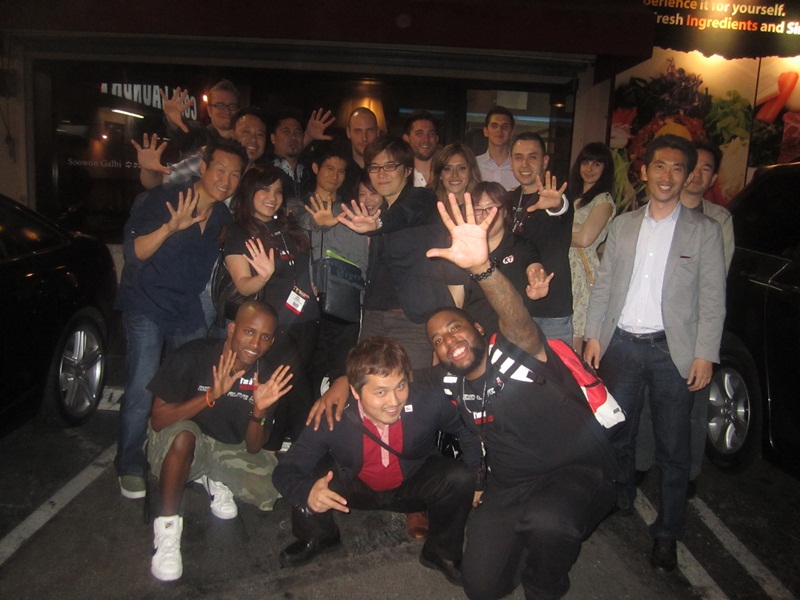 Thank you very much to Tecmo Koei, Team Ninja, IGN, Chosen1,Vanessa, Master, Swoozie, Tom, Bryan…you all have been so nice to me. That's what I love about travelling, I meet new friends sharing the same passion and I'm having so much fun !

My opinion on DOA5

I definitely loved the game, the players, the staff as Tecmo Koei and Team Ninja. DOA5 is the most beautiful fighting game i've ever seen. Really. I can't wait to see the final version. And I still have so much fun playing it, especially with the new features such as Critical Burst and Power Blow…

I think I'll play DOA5 seriously when it will be released 🙂 So I can't wait to join the community and play with many players ! Meeting all those DOA pro players and see how kind and cool they are, made me want to be involved in this community. 🙂 So I hope you guys will be interested to play DOA5 and enjoy !
Oh, and I've heard there is a DOA community website and forum very active, if you're interested in the game, you should definitely check Free Step Dodge website here !

Much love for DOA5 !

PS : My next article will be about Major League Gaming Spring Championship, where I ranked Soul Calibur V Vice Champion (winning 3600$) defeated by the famous French player and my friend Keev (6000$)!