During my trip in Japan, I organized an interview with the Dead or Alive 5 Director « Yohei Shimbori » and Producer « Yosuke Hayashi« . Marko, the Product Manager, helped me for the translation.
We discussed about the transition from DOA4 to DOA5, the decision to have Virtua Fighter characters, the Story Mode, the Online Mode, the music, the DOA competitive scene…

After the interview, I played with DOA5 Director Shimbori-san, he is so funny when he plays ! He expresses himself a lot ! 😀

Check out the matches here ! :

So here is the interview, hopefully you'll learn a lot from it ! Enjoy ! 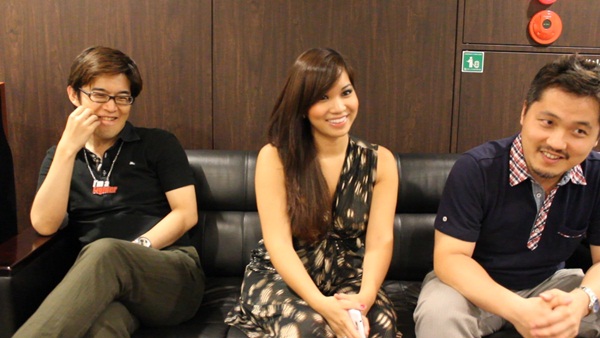 Kayane : Why did it take so much time to produce Dead or Alive 5 ?

Yosuke Hayashi : After we finished Dead or Alive 4, we didn’t know what we were going to do next.

After Dead or Alive 4 was released, the team was separated. After a while, we brought the team back to make Dead or Alive Dimensions. Then 3 years ago, we began to think “What can we do for Dead or Alive 5 ?” We then came back with a clearer answer of what we wanted to do with the series to improve it.

Yohei Shimbori : Actually, it’s not that we didn’t do anything after Dead or Alive 4. The team really wanted to make the game. To find the answer of what the concept will be for the next game, I looked for the entertainment in things like watching movies… and did some research about what “Entertainment” really is. At the same time, I wanted to experience what “Fighting” really is. So I entered a Taekwondo Dojo, I practiced there, and I got kicked! (laughing)

Then I realized what fighting is, and what martial arts are really. So, I used that as an inspiration to make the game.

Kayane : Why did you choose to add Virtua Fighter characters?

Yosuke Hayashi : When we first started the DOA Series, our goal was to be better than Virtua Fighter. This was our inspiration for the first Dead or Alive.

By making DOA5, we wanted to pay respect to Virtua Fighter, so we discussed with the producers and said : “We’re making Dead or Alive ‘5’ and you also have Virtua Fighter ‘5’, so it would be great to make something together.” And they surely agreed, saying it would be a good opportunity for them to make that together and cross the two worlds.

So we were very happy to be able to have Virtua Fighter characters! It’s an honor for us.

Kayane : What made you choose the Virtua Fighter Characters to be Akira and Sarah ?

Yohei Shimbori : I wanted to implement characters that I always used to play like El Blaze and Taka-Arashi. But after discussing with Hayashi-san, we came to the conclusion to add a character that is original from the first Virtua Fighter. So we thought of Akira since he’s the main character of this game.

Concerning Sarah, we wanted a male and a female character. Actually, Sarah was our first choice for female chars, and we stayed on this decision.

Kayane : In DOA5, the character designs have changed and they are more “human-like”. All the fans were impatient to discover the new face of their favorite character.
Which character transformation do you prefer?

Yohei Shimbori : The biggest surprise and shock for us was Kokoro. We felt that Kokoro would be the most difficult character to bring from DOA4 to DOA5 and keep the atmosphere of who Kokoro is. So we were worried to bring her in DOA5 and how she would look like. After putting a lot of work in, and model came out, we thought that it’s actually, very good!
All the characters are fantastic really, but the surprise and shock we got from Kokoro makes her my favorite.

Yosuke Hayashi :  My favorite is Kasumi, she’s been such a cute character throughout the DOA series. We were quite worried about what the fans would think of her new face. When we were making her, we were always thinking if she is going to be okay, and if the fans will like her, since we think she’s the character with the most impact. When we revealed her, the fan feedback we received was very positive. We were really happy about that.

Kayane : How will the story mode be organized ?

Yohei Shimbori : It won’t be like DOA Dimensions. You won’t have to pick a character to discover their story. It’s more fragmented and a more cinematic type of story that will be in different places. It’s different from what we’ve done until now, but we can’t talk too much about it.

Kayane : Will the character relationships be deeper?

Kayane :  Concerning the music… We have stage music, but will the characters have their own theme?

Yosuke Hayashi : What we wanted to do this time, was to make music that fit the stages. But when you play, you will notice that the music fit the characters as well. It’s a mixture of both (stage and character theme)

Kayane : The online mode for DOA4 was great. What will you improve for the DOA5 online mode ?

Yohei Shimbori : We’ll have an Online Training Mode so that you’ll be able to train with someone online. It will have a voice chat and a text chat. In this mode, you can pretty much do everything you can do in offline mode. People can come to your training session, watch what you do, and hear what you say.

Kayane : Can we expect old DOA music as DLC ?

Yosuke Hayashi : We really would love to have DLC with the previous DOA music, we are thinking about how we can do that, and deal with the property.

Kayane : You have been to E3 and SBO. What do you think about the Japanese players compared to the American Pro players? (Such as, Master, Vanessa…)

Yohei Shimbori : There weren’t many opportunities to gather the DOA Japanese players together.

The only opportunity we had in the past to make a World tournament with Japanese, American, and European players, was World Cyber Games. Besides that, there wasn’t a possibility to make a head-to-head match between Japanese and American players. We really would like the Japanese to meet the US champions like Master and Vanessa, so we want to create a place where they can all meet up and face each other.

To compare them, Japanese players are more focused on details, and they will practice again and again until they perfect it. So the attention to detail and repetition are their strength. They think a lot when they’re playing. It would be great to see the Japanese players against the rest of the world.

Kayane : Do you plan to support a tournament or maybe make your own championship?

Yosuke Hayashi : For sure, we want to build a future for DOA5 so we would like to work on that with the fans, and the community. We’re working with IPL, and we think it’s an excellent opportunity.

Definitely after the game comes out, we want to think about ways to make the game competitive.

What would you like to say to the fighting game fans to make them motivated to play DOA5 ?

Yohei Shimbori : For all the competitive fighters, DOA5 is better than the previous versions. We want Dead or Alive 5 to be a competitive fighting game. The game has become more competitive than it used to be before, and we have balanced and adjusted it so that it can be that way. So Kayane, you are strong already! You shouldn’t spend that much time playing Soul Calibur, you should come and play Dead or Alive 5! So once you get the game, come to our camp and become a professional DOA5 player! (laughing)

Kayane : As you know, my nickname is a mix of Kasumi and Ayane, I’ve always been a DOA fan! But I was too young to compete when there was WCG and CGS…I was not allowed to compete because of the age limit. So this time, I will play and compete for DOA5, and hopefully being able to travel just as I did for Soul Calibur V!

Yohei Shimbori : Also another big reason why you should play Dead or Alive 5 is : There are many female characters! They are cute, and cheaper than in any other fighting game! (laughing)

Kayane : Haha! Yes, you definitely know how to make the cutest female characters…that’s why I love it too! (laughing)

Then, Hayashi-san, your last words?

Kayane :  Thank you for your time !

I would like to thank Hayashi-san, Shimbori-san and Marko for welcoming me at Tecmo Koei Office, for their time and their kindness !
Please, make sure to spread the interview, it would be really appreciated 🙂 !