After reading my report about SC5, Daishi Odashima replied on his Twitter and just gave informations about SC5 to confirm what I said and give more details about the gameplay. 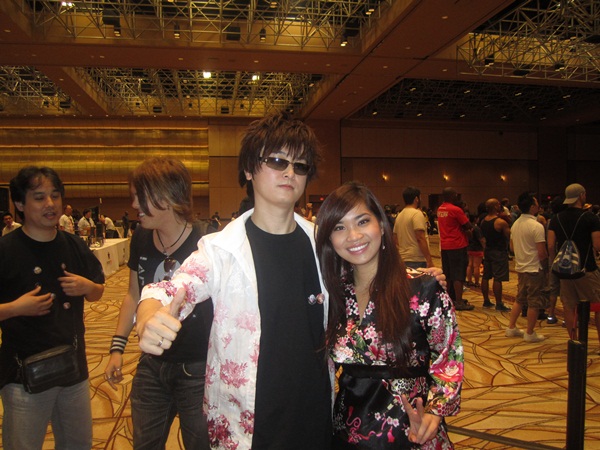 Guard Burst : If you keep guarding, the life bar flashes from yellow to red until the guard breaks. The system is called “Guard Burst”.
Attacks like 3B will easily become a guaranteed hit. It recovers from red to yellow to normal after a certain time.

Guard Impact : It uses 25% of the Soul Gauge.
Single command 4A+B+K which repels all H, M, L attacks. Uses 25% of the gauge. Doesn’t work on throws, unblockables and CE.
It’s pretty powerful. The existing system was OK for advanced players but others couldn’t use the repel & parry effectively.
4G,1G,6G,3G inputs were complicated so we made it just one command (there were feedback saying it came out unintentionally as well).

Using GI on 2A won’t give you much fame advantage but Mitsurugi’s 66A+B will give you a huge advantage.

Just Guard : Just before an attack hits, press G to do a standing or crouching JG (2 frame buffer).
When successful your guard stun time reduces to a set frame. All attacks can be GI.
Just Guarding big attacks will give more frame advantage than small attacks.

Critical Gauge : Fills up to 200% at MAX
Being active and taking action fills up the gauge. Hitting the opponent, making them block, doing ukemi etc.

Critical Edge : Uses 100% of the Gauge. The command is 236236A+B+K. The timing has been balanced to be very easy so any one can pull it off.
You can think of it as a powerful version of standard attacks. Damage and speed varies (10 – 40F start-up, 40 – 160 damage).
Properties also vary: some have impact properties, some have invincibilty against high attacks, etc.

Until the start-up animation plays (screen freeze), it can be stopped with standard moves. Once it plays it’s unstoppable

ZWEI’s low in same time as EIN’s mid : Daishi Odashima confirmed it’s possible and make the Zwei’s low not possible to guard then. BUT, it’s a very STRICT timing.

My thoughts : Anyway, I think even if the timing to do it in same time is strict, I think it’s still a lot of pressure to have Zwei and Ein’s moves to protect.
Thanks to Daishi Odashima for his time !