[BLOG] An incredible moment shared with children around video games

Another blast from the past, also from 2015 ! As always, the text below is untouched to keep the original tone and feeling. I hope you’ll enjoy this incredible memory !

I wanted to come back toan incredible moment I went through, sharing my passion for video games with young (and less young) children 😀 ! (the event was targeted towards kids and teens up to 16, but a few older and welcome people came too !)

I was invited by the city of Ermont to play with the town’s children in the Espace Jeunesse on National Women’s Day. The whole Espace was mine and so with my team we set up a small stage and brought a few consoles with, obviously, fighting games ! We had Ultra Street Fighter IV, Soul Calibur V, Smash Bros Wii U and Injustice.

To be perfectly honest, I never ever did an event dedicated to children beforehand ! I was genuinely afraid it’d bomb, that nobody’d show up and kids wouldn’t be interested by what I was doing or didn’t like me… but I had to try and see how it went, especially considering I LOVE kids !

To my own surprise, the minute it started children came in droves ! The games set-up were all full !

I took the time to teach them how to play the different fighting games and seeing their eyes light up just looking at the character selection screens felt amazing ! And hearing some of them ask me « can you teach me how to play? » with their lil’smiles and everything… Fouahhhh, that was too much! 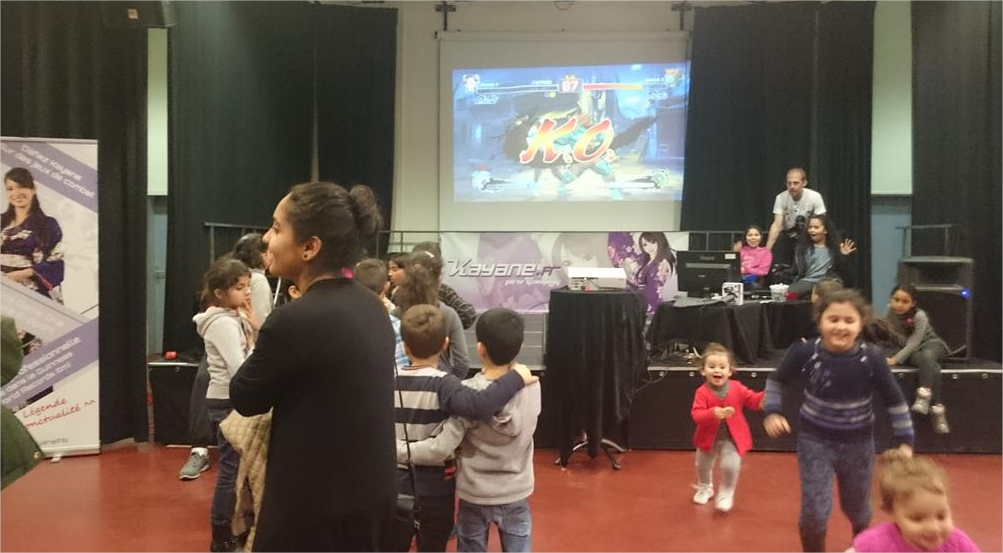 It really resonated with me. I started playing fighting games when I was 7 and seeing this reminded me when I did the same all this time ago. It felt so peculiar, yet important.

« Why choose this character over another ? » was the question I asked myself a lot. Children don’t care about how strong the characters are, nor do they try to copy anyone. Their choice comes from the heart and it can tell so much about their personality and tastes !
(To be fair, I’m also still puzzled by why a young girl went with Solomon Grundy in Injustice XD)

It’s amazing to have children playing video games in the same place ! When I was in school I had very few children my age I could share my passion with and kinda felt at times like an outsider ! Here, they were all simply happy being there and playing, which felt great ! 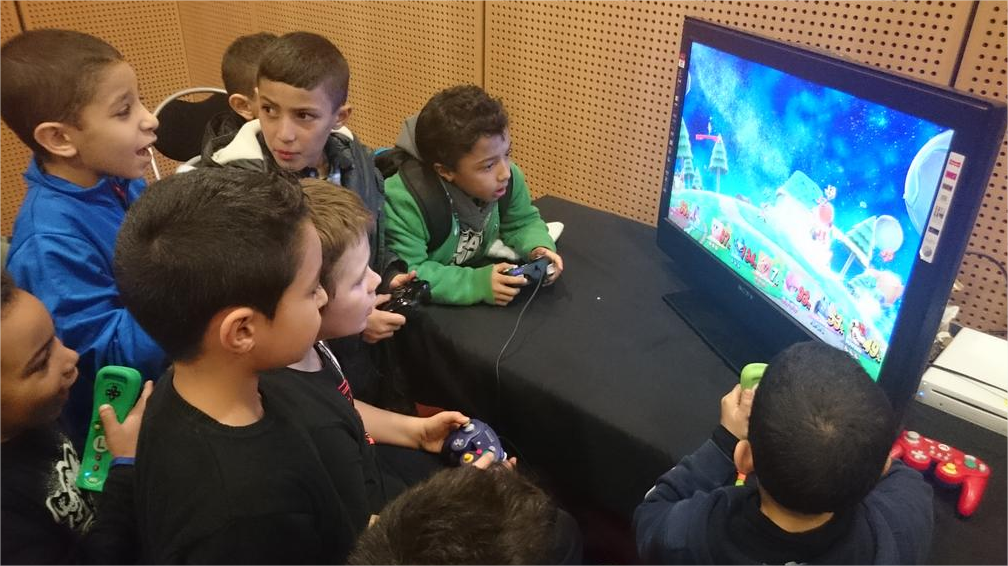 The Espace never got empty. Quite on the contrary, more and more children came by the hour and so there wasn’t enough consoles for them to play on ! The event was a success and I felt relieved as the sense of doubt that lingered beforehand soon vanished !

And so I played with children on stage. I played a fair share of matches and it was really funny seeing them rush towards the stage whenever it was their turn ! :)They were also really curious and did their best to follow my advice. I was surprised at how patient they were ! I expected them to move around the place or not listen to anything others would say, but they truly were respectful and adorable ! 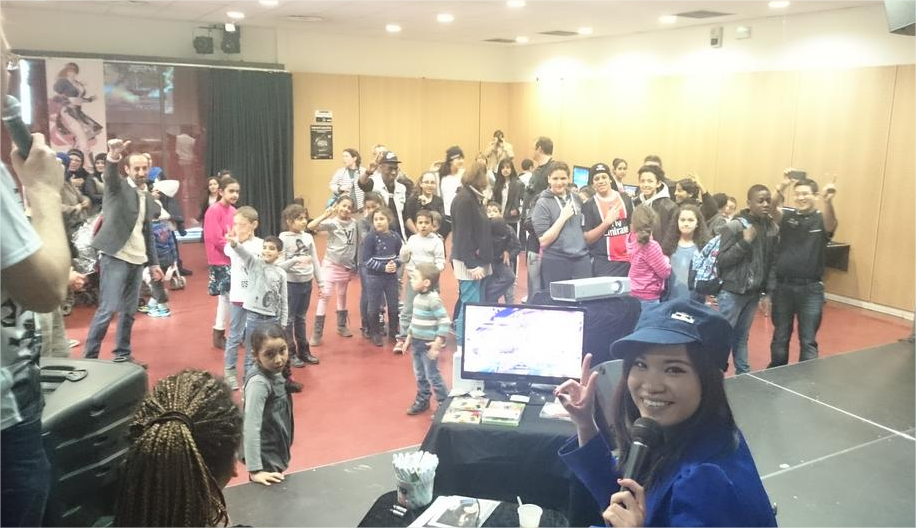 Girls from 4ème (around 13) even had questions prepared for an interview for Ermont’s website ! They were a bit intimidated as it was the first time they did this, yet they quickly knew they didn’t have to be afraid and it soon became an exchange between passionate people ! 😀
Questions went from « What did you do to become such a great player ? », « What’s your favorite manga ? » to « If you had to choose between having 4 eyes and one arm or one eye and 4 arms, what would you choose ? » and even « Do you like kebabs ? » hahaha we laughed a lot and children who listened to us quickly chimed in to ask their questions !

I still wonder how people can say video games make others stupid, violent or antisocial… Especially after witnessing moments like this ? I truly felt I taught some good values by playing with these kids : how to use the characters’ moves in a logic-focused manner, to be smarter than their opponent, realize the qualities they themselves have to use them in-game and give their all until the very last pixel of life… And also first and foremost how to be fair-play ! Not « to kill » as some people would say. 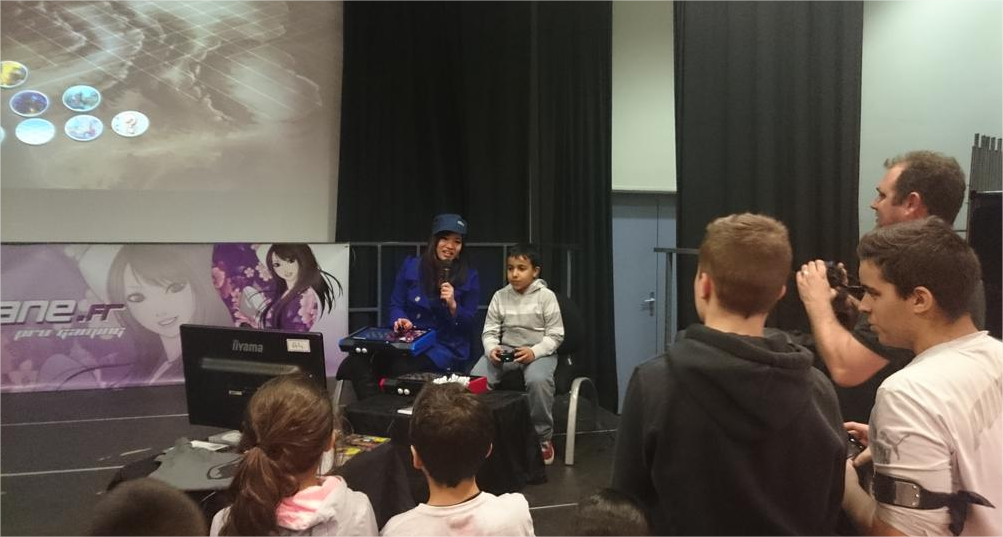 In short, a day unlike any other. Where I learned a lot and one that gave me a lot of ideas to do these types of events targeted towards children ! I really felt « useful » today and I truly think video games need to be a part of children’s education.

I thank the town of Ermont, it’s children and their parents for giving me their trust ! Thank you so much for being so adorable with me ! This day felt like a blessing !

(And I know some of you might think this article was a load of rainbows and magic, but whddya know, the children’s joy and innocence does soften one’s heart 😀 !)