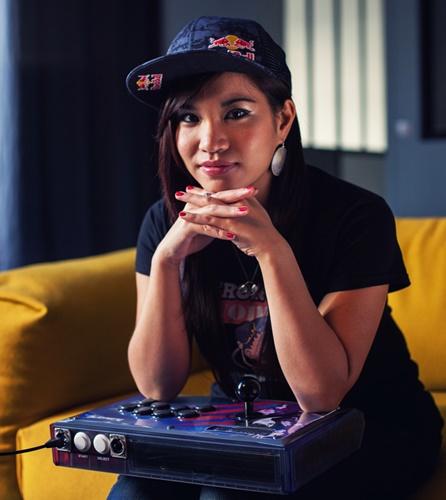 Biography straight out of Wikipedia

Marie-Laure Norindr, alias Kayane, born on June 17th1991 in Paris,is a French professional video game player. She performs in tournaments on multiple fighting games, mostly on the SoulCalibur, Dead or Alive and Street Fighter series, organizes gaming-themed events and also appears on the French TV channel Game One in the weelky show Game One e-sports since October 2013.She’s also a part of #TEAMG1, a show also aired on Game One, alongside Julien Tellouck (the show’s host), Marcus (former collaborator of the TV channel Nolife and currently on Game One), Anh-phan, Genius and Kythis.

Of Laotian and Vietnamese descent, Marie-Laure Norindr was born in Paris on June 17th 1991 and grew up in Argenteuil (Val-d’Oise). Kayane started playing SoulCalibur around the age of 7. She participated in her first tournament at the age of 9 and went to become vice-champion in France on Dead or Alive 2, and then vice-champion in France on SoulCalibur the following year.

At age 12, she represented the French team for SoulCalibur II at the World Games Cup and helped France ranking vice World Champion in team and solo battles. In the solo category of the world tournament, she ranked  4th out of 128 contestants.

The same year, she also won her first major tournament against SoulCalibur II’s world vice-champion DTN 10-5 and even won her first 1500€ cash prize.

She then got to widen her trophy haul by dutifully participating in various events in France in order to be able to participate in more worldwide events, the first of which being the biggest one of all : 2009’s Evolution Championship Series in Las Vegas. She barely missed the top 8 on SoulCalibur IV, ranking 9th.

In January 2012, the 2012 edition of the Guinness World Records awarded her with the world record for a number of fighting games tournaments won by a female player (top 3), with an impressive track record of 42 podiums.

In 2012, she played in three Major League Gaming tournaments in the United States, ranking 7th, then 2nd and finally 3rd at the MLG Arena (that reunited the tournament’s previous top 8), and landed 2nd at the CEO in Orlando on SoulCalibur V.

Kayane is regularly invited to national events (gaming and anime conventions) and around the world (2012 and 2013 in the United States, in Japan and in the Caribbeans in Saint-Martin).

The characters Kayane plays are the ones that resonnate with her on a personnal level : Xianghua, Viola and Leixia, Chun-Li, Lili, Alisa, Xiaoyu, Kokoro, Ayane and Kasumi.

She naturally became a person to contact within the game’s industry, from publishers, accessory and hardware manufacturers, but also more specifically fighting game producers, like :

She made quite a few private interviews, with questions specifically made with fighting game fans in mind. In SoulCalibur: Broken Destiny, players can create customizable characters. Namco Bandai Games integrated one specifically named « Kayane » giving a small hommage to the champion, something the publisher would later do once again in SoulCalibur V.

During EVO 2011 in Las Vegas, Daishi Odashima himself gave her the original artwork of Xianghua et Leixia to thank her for her dedication to the game.

During SoulCalibur V’slaunch in 2012, Namco Bandai Games even used her likeness as well as SoulCalibur IV champion « Scud » to create an advertisement campaign directly geared towards players.

Invited to a debate with Marcus on the TV channel Game One in late 2012, she quickly gets to work with him to co-host the show as a journalist specialized in fighting games and gaming competitions.

In October 2013, the channel announces a show 100% geared towards eSport named “Game One Esport” ,prepared and presented by Kayane, and back up by Gen1us, a famous Tekken player.

The Kayane Sessions she frequently organizes are meet-ups made to reunite players from all of the fighting game spectrum and make people grow together as a strong community. These events occur once every two months would gather hundreds of players in various places around Paris, like the Cybercafé Milk Opéra (2010), the Utopia Gamespace (2011), the Meltdown (late 2012), le dernier bar avant la fin du monde (2013) or even la tête dans les nuages (late 2013).