After the Nintendo Store, Let’s switch things up and go to the Pokémon Center and the Capcom Store ! The funniest part comes from the fact all three stores were located in the same building (Parco, in Shibuya)… Basically, if you’re a fan of any of the companies’ licences, either you go inside the building to scream at all the 100% official merch or you do you best to avoid it because you know fully well you wouldn’t come out unscathed 😆

If there’s one way to describe the Pokémon Center,it’s that it’s oozing with style ! Not only was the Mewtwo at the entrance a huge rush of nostalgia with memories of the first movie coming back, but the store also had a whole collection focused on street culture. Now of course there also was more traditional merch, like jewelry, trading cards and plushies… So… Many… Plushies ! And to top it all off, there were also more unique things centered around particular Pokemon. It was hard not to cave in and get everything, but I had to think about the trip back home and the luggage. If I did cave in, I think the price for the excess luggage would’ve gotten… Kinda excessive ? 😆

Here's a small video about the Capcom Store in Shibuya ! So many Okami goodies ? pic.twitter.com/fGdiWUBWFr

As for the Capcom Store, it was a pretty similar deal. Just replace Mewtwo with Amaterasu and the other Pocket Monsters with the more terrifying ones of Monster Hunter ! Speaking of which, it was pretty obvious going into the store that this series is one of Capcom’s most popular IPs in Japan ! Then again, we also had some good rep for Ôkami, Street Fighter, Ace Attorney (with perfume, oddly enough), Resident Evil, MegaMan and Devil May Cry ! Also, I don’t know what’s with Japan and their obsession with Tsum Tsums, but this store had quite a lot of them…

And finally, for anime fans, there was the Nakano Broadway. A whole building filled with stores dedicated to merch new and old and of any kind ! Here you can find new and second hand stuff and the selection is H-U-G-E ! Now obviously there were the easy targets, like Dragon Ball and One Piece, but also more obscure stuff, with even toys dating back to the 60’s/70’s ! I’m guessing the odds of finding the one thing you’d desire is around the 100% mark, so be careful with your wallet when entering there !

So yeah, it was a blast going in all these stores. A damaging blast in some ways, as they were lairs of temptation, but a blast nonetheless !

Let's get back to training on Smash with Leon ! 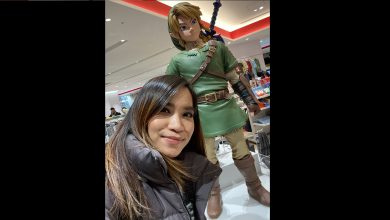